I met Rick McGranahan online while discussing his book, Visting the Ghost of Puppyboy with a very dear lady who'd given the autobiography a good review. In a few days I was leaving for vacation, and her words encouraged me to take the book along. Only, how could I get a copy quickly? The reveiwer made introductions and the author himself stepped in and saved the day--overnighting me a copy. Nothing makes you feel more special than for a stranger to go out of their way for you like that. Over the course of the next few days I fear I neglected the beauty of Oahu, for I kept my nose stuck in Rick's memoirs, absorbing each word.

One of the unique things about Visting the Ghost of Puppyboy is that is was deliberately left unedited, to give the reader the feel of the author's state of mind during all that transpired in the pages. The result is that from start to finish it reads like a letter from a friend, sharing triumphs and tragedies, instead of a commercially packaged offering. Through Rick's memories I came to know the man who wrote them down and shared them with the world. Through personal correspondance (read: rabid fangirl letters) I came to know him ever better. We became Facebook friends, and I looked forward to the hot men pics he posted, as well as his commentary on life.

Having met Rick's love Paul in the latter pages of Puppyboy, I was thrilled when Rick posted wedding pictures of the two of them. They made a beautiful, happy couple.

Then last year I met Rick McGranahan face to face at the Rainbow Book Fair in NYC. OMG! What a wonderful guy! He hammed it up on a grand piano for pictures. I'd loaned a friend my signed copy of Puppyboy and she forgot to bring it with her on that trip, so she bought me a new copy, Rick signed again (with a hilarious inscription), and posed for pics with me. 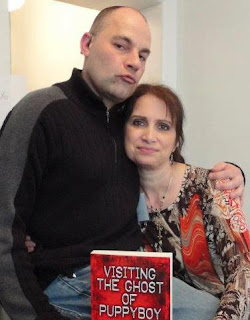 I hadn't heard from him in awhile, but folks get busy and they lose touch, only to reconnect the next week when they post again. While I was in DC a few months ago we'd planned to meet for dinner, but car trouble derailed that meeting, to my deep regret.

Yesterday I received a Facebook invitation--nothing new, I get them all the time for this book release and that chat. This one was different. For a moment the world seemed to stop, for I read the following words: You are invited to Rick's Memorial Service.

Shock, horror, denial... all slammed into me. How could this young, vibrant, happy man be gone? I don't know the details of his passing, only that it was sudden. My thoughts and prayers are with his husband Paul and the rest of the family.

Rick, you touched my heart and will be dearly missed.

Now, I'd like to share with you my review for Rick's book, in hopes that those of you who didn't know him will have some idea of the impact of his words.

Eden's Goodreads review of Visting the Ghost of Puppyboy

** spoiler alert ** I'm being haunted by the ghost of Puppyboy. For a period of three days I was a part of his life. I danced with him on a raised platform, basking in the spotlight's glow. I cheered on his efforts to find true love, and held him close when what he thought was love poofed like smoke through a closed fist. I screamed, "What the hell do you think you're doing?" when he followed the downward spiral of drugs, alcohol, and meaningless sex. He took me many places, introduced me to countless people, some good, some bad, many unforgettable. I laughed when he laughed, cried when he cried, begged him to lay off the drugs, and prayed that his risky lifestyle wouldn't reap long-term repercussions. I was a mourner when Puppyboy was laid to rest, admiring his determination to stay alive, and I was there when he crashed and burned, Rick rising like a Phoenix from the ashes.

Paul became my hero when he issued that ultimatum that quite possibly saved Rick's life, and I shed many happy tears when love finally came to stay. Thank you, Mr. McGranahan, for inviting me to share your adventure. The deliberate lack of editing made this tale more personal; it's a heartfelt, uncensored letter from a dear friend, not a commercial effort. What struck me most is that the author is unapologetic. Too many memoirs are filled with regrets, but Rick McGranahan understood that this was merely a journey to be taken. It's his story and he's not ashamed of it. There's a lesson there for the rest of us: accept who you are, change what needs changing, but never forget that who you were shaped who you are today.

And the story continues. For as much as I was a part of Puppyboy's life, he's now a part of mine, and I occasionally catch myself seeing the world through his eyes. To have been so young, he imparted valuable wisdom, the greatest of which is that love is out there; it may take awhile to find it, but it's there. Visiting the Ghost of Puppyboy is a raw, uninhibited peek into someone's life, a wild ride well worth taking, and your tour guide is one of the most unforgettable characters you'll ever meet. Some review sites have distinctions above five stars, to indicate that a book is a must read and a keeper. While I don't currently have that, I will say that this is one incredible book, and I am in awe of its power. I give it five stars because that's all that's allowed on this site. It deserves so much more, and I'll be revisiting Puppyboy often in the near future.

Goodbye, Rick. You won't be forgotten.
Posted by Eden Winters at 4:16 PM