Musical Influences I - A Guest Post by Amelia Gormley

I've offered posts about literary influences in the past, but how about musical ones?

My guest today is Amelia Gormley, who found great inspiration for her characters in music.

I think if there is one character or personality trait which Derrick borrows from his author, it’s a love of music from before his time.

I grew up surrounded by people not in my age group. Not only did I have very little exposure to people in my age group, but I always related better to adults than I did to other children. As a result, it is the generation before mine which most influenced my musical preferences. I couldn’t name you more than a dozen songs and their artists from the last decade. But I could recite for you most of the entire songbook of several artists who died when I was still in diapers, if not before.

My mother is a huge fan of Jim Croce and when I was little, she used to make me swear to have “Time In a Bottle” as the first bride/groom dance at my wedding. I didn’t end up carrying through on that promise, but I did end up absorbing her love for Croce.

Most people are familiar with some of the standards released in Croce short, seven-year career: “Time in a Bottle,” “Bad, Bad Leroy Brown,” “Operator” and “I Have to Say I Love You in a Song” are quite well known, though where our generation is concerned, they’re mostly well-known because they’ve been turned into marketing jingles.

What I like are some of his less well-known pieces. I love his complex dual, sometimes even triple, guitar harmonies. I like that his upbeat songs are catchy and always make me tap my feet, and his mellow songs are relaxing and touch something inside me.

When he’s funny, he’s funny. “Roller Derby Queen” and “Rapid Roy, the Stockcar Boy” and “Don’t Mess Around with Jim” never fail to amuse me. But when he’s introspective, he’s heartbreaking. Listen to “Lover’s Cross” or “Photographs and Memories” sometime and really think about what he’s saying, that gentle examination of love that has been lost or is in the process of fading away, sometimes edged with bitterness or tragic grief. And all of it carried on a voice that feels almost fragile, it’s so tender.

His songs are simple, beautiful, and heartfelt. You can’t ask for more than that.

One thing I very much regret about the writing of Acceleration was that there was no way I could afford the licensing fees to get the rights to reprint any of the lyrics of Jim Croce’s “I Got A Name.” If I had, I would have worked a couple of the lines into the last chapter when Derrick plays for Gavin.

To me, that is the quintessential “Derrick” song, both in terms of where he’s been and where he’s going. It’s a song about a person who has a great deal of pride in where he comes from and the legacy that his family has left him. But it’s also a song about a man who is trying to find a way to keep moving forward with his life, so that he doesn’t become mired in the past and begin to stagnate. It’s a song about respecting one’s past and heritage, while moving into one’s future. And that is really what Derrick’s journey is all about. 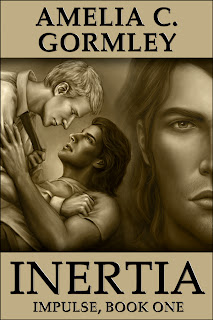 AN OBJECT AT REST

Quiet, down-to-earth Detroit handyman Derrick Chance has had enough loss for a lifetime and he has no intention of ever risking his heart again. Living alone in the old house his grandparents left him, with only his dog and a few close friends for companionship, he has written off the possibility of romance or even sex. He refuses to consider himself lonely, or wonder what he might be missing. His life is organized, predictable, and, best of all, risk-free.

Until the day he installs shelves for accountant Gavin Hayes. With his contradictory combination of confidence and self-doubt, Gavin draws Derrick in with an intensity he's never known. As undeniable as gravity, Derrick finds himself falling for Gavin in defiance of all his usual slow and methodical ways. But Gavin carries wounds of his own. Fresh from an emotionally abusive relationship that ended with a dangerous betrayal, his future is far from certain. Can Derrick choose passion over safety, and let himself believe that Gavin is worth the risk?

Excerpt
It wasn’t the idea of sex that scared him. He could handle that, and he could handle just being friends. It was the somewhere in between, where feelings could happen, that he wasn’t sure about.

But Gavin felt good against him. Right. Closing his eyes for a moment, Derrick drew a slow breath and laid his arm over Gavin’s shoulders, silently inviting him to make himself comfortable. And Gavin did, slipping down a little to make more room for Derrick’s arm, laying his head against Derrick’s chest, where his heart hammered within the too-tight confines of his ribs.

Derrick had no clue what show they were watching. He couldn’t hear over the drumming in his ears and he didn’t want to even look at the screen, nor could he stop glancing down at Gavin’s hair just below his chin. It took all Derrick’s willpower to keep himself from leaning down and nuzzling his face in Gavin’s hair to try to get a better whiff of him.

When Gavin lifted his head and tilted it back to look at him, Derrick’s eyes immediately went to Gavin’s lips. His fingers tightened on Gavin’s shoulder and when he finally managed to tear his eyes away from Gavin’s mouth to meet his gaze, he knew Gavin had seen the stare.

And then Gavin wet his lips with his tongue.

Derrick caught a nervous breath, torn between the impulse to act and that tiny, nagging hint of uncertainty that maybe Gavin wasn’t ready for that yet.

Gavin smiled, looking faintly amused. “You really don’t know an invitation when you see one, do you?”

“Guess I don’t. Look,” he said haltingly as he tried to form his racing thoughts into words that would actually be intelligible when he spoke them. “You know, it’s been a while. And I don’t really know what I should do here. What you need.”


Gavin looked up at him a while longer, his eyes wide, pupils large and dark, before he pushed himself up. He pulled his glasses off, his movement slow and deliberate as he laid them on the coffee table, giving Derrick plenty of time to back out. Then he turned and kissed him.

Derrick heard himself moan, his arm tightening behind Gavin, sliding down to wrap around his back and draw him closer. He tasted as good as he smelled, even the hint of beer on his breath. It was strange; fulfilling the promise of contact that had been hovering between them all day both relieved Derrick’s tension and made it ten times worse. It threatened to send something ravenous to the surface that he hadn’t known lurked beneath.

The touch of Gavin’s hand on his face, stroking his cheek and jaw, felt good. Gavin’s cool fingers against his skin both soothed Derrick’s nerves and brought them snapping to attention. And when they moved down to Derrick’s neck it was even better. Derrick gasped into the kiss at that touch on his sensitive skin. As his mouth opened on the inhalation, he felt Gavin’s tongue against his lips.

Any thought he had of taking things slow promptly dissipated. He wanted Gavin’s body against his, and they shifted simultaneously. Derrick turned as much as he could without drawing his legs up onto the sofa, and Gavin drew his knees under him, the motion giving him a height advantage that he used to take control of the kiss. His hand buried itself in Derrick’s hair, his mouth covered Derrick’s. His lips urged Derrick’s open, his tongue sliding in, stroking.

Derrick’s other arm came around Gavin, trying to draw him even closer. He wasn’t sure how Gavin ended up in his lap, straddling his hips. Gavin loomed over him with a hiss of denim-on-denim as Derrick, without any thought or intention, shifted beneath him, seeking friction against the hard-on trapped beneath his fly.

He didn’t know he’d spoken, panting the words between increasingly urgent kisses. He rolled his hips again beneath Gavin, beyond self-consciousness, not caring if it was too forward, too suggestive. Gavin didn’t seem to mind; his own body moved to increase the pressure. As that first kiss had done for his nerves, the rubbing of Gavin’s cock against his beneath the layers of denim both soothed the insistent, throbbing ache in Derrick’s balls and made it far more desperate. He groaned, his hands clutching at Gavin’s back, the kisses passing beyond exploratory and heading straight into demanding.

When Gavin’s hands closed in his hair, gripping it, Derrick arched his spine, his hips lifting as he responded to the pressure drawing his head back. The pull on his hair was tight, good, skirting the edge of uncomfortable in an absolutely perfect way. He tore his mouth away from Gavin’s with a whimper as the pull became harder; overwhelmed, he tried to catch a panting breath and get a grip. With every response, every sensation, Derrick felt closer to the brink of flying completely, insanely out of control.

“Sorry,” Gavin murmured as his hands released Derrick’s hair and Derrick almost groaned at the loss. He shook his head in silent denial as his brain tried to remember how to make words.

ting felt intoxicating. He was high, beyond thought or reason, doubt or control.

Abandoning any further attempt at speech, he pulled Gavin back to him, taking over the kiss. Hard, urgent, edging toward rough as he tried to find an outlet for that plaguing need for more. He was aware, now, of the rise and fall of his hips, knowing full well what it suggested. He wanted Gavin. God, he wanted him, and just the wanting felt intoxicating. He was high, beyond thought or reason, doubt or control.

More, his body demanded, gripping fistfuls of the back of Gavin’s shirt, thrusting up against Gavin.

More. Gavin responded, pressing down to meet him.

Derrick leaned back, reclining as far as he could against the sofa, no more concerned with the message he sent by moving toward the horizontal than with the blatant grinding of his hips against Gavin. He drew Gavin down tighter above him, picking up the pace, rubbing against him urgently. The delirious thought occurred to him that he should be thankful he’d jerked off that morning, or this would already be over.

He didn’t want it to be over. Not nearly over. He wanted… God, he wanted Gavin’s skin. It didn’t occur to him to ask first; his hands simply obeyed the imperative without thought or hesitation, releasing their grip on Gavin’s shirt at the shoulders to seize it lower, pulling it up.

The way Gavin’s body tensed didn’t register, not at first, even when Gavin drew back and panted, “Oh, God. Wait… wait.”