The Return of Tinself and Frost

I'd hoped to write a longer version of Tinsel and Frost and still may one day, but other, more pressing projects pushes any rewrites into the far distant future. The site I'd hope to give the short to for a permanent fundraiser  decided not to pursue an online store at this time. Since I've received several inquiries about the story, I decided to republish it.

Thanks to Jared Rackler of Jared Rackler Designs for the lovely cover, and to the incomparable P.D. Singer for formatting instructions, advice, and for just being a darned great person and fount of wisdom. 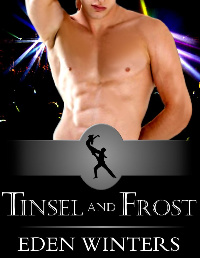 
Frost, the big, pale bouncer, has reasons of his own for keeping a watchful eye on Tony. He keeps his distance, too, until he has to bounce an aggressive customer who takes things with Tony too far. They have a short, shared walk home but a huge divide between their lives. Do Tony and Frost have more in common than they believe?