Three writers and a weekend...

Back in January I had the priviledge of meeting up with Ally Blue and D.H. Starr in Asheville, NC. (You can just imagine the topics of conversation when three m/m writers get together.) While we toured the Biltmore House, attended a wine tasting, and enjoyed a lovely lunch, the highlight of the weekend for me was the company. Before I began writing my first book I was a huge fan of Ally's, and Doug is one of the most amusing and entertaining people I've ever met.

During the weekend, Doug mentioned that he had a work in process that he'd been pecking at for two years. With a little encouragement, he began reading to book aloud. First off, I've recently discovered (via book readings) that I quite enjoy being read to. Secondly, the moment Doug began reading, I was hooked.

"You have GOT to get that off your hard drive and published," I told him.

Over the next few weeks he sent me chapters, and I had the pleasure of playing beta for a captivating novel the puts a unique spin on the tried and true vampire tale. The result is the cleverly named: Feed. Prey. Love.

While the reluctant main characters slowly cracking their shells to let each other in kept me riveted to the page, an outrageous secondary character stole quite a few scenes. In a place where humans and paranormals coexist, Purvis the fairy is that meddling, good intentioned friend who spends a lot of time apologizing when his matchmaking and schemes go awry.

I'm so very glad that this book escaped the confines of Doug's computer, and when you're in the mood for a sizzling vampire love story, you might want to check this one out. 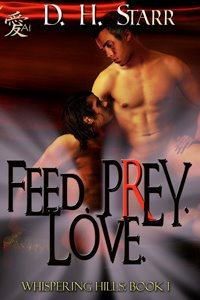 At Whispering Hills where mortals and paranormals coexist peacefully – and romantically - love really does bite!

Talib Eldridge is a vampire who lives with guilt. 100 years ago, he accidentally turned a human to a vampire and has been afraid to get close to anyone for fear of ever losing control as he once did. When he meets Conley Berillo, his commitment to living in isolation is challenged. Immediately drawn to the human, he can’t help but fall in love.

Conley has always felt out of place. Never fitting in with others, he too has lived in isolation. When the existence of paranormal creatures is finally acknowledged, he feels an immediate affinity to the outcasts, still feared and hated by humans. Moving to Whispering Hills in Providence, Rhode Island, he knows immediately that he belongs to this new world. When he meets Talib, that conviction is only solidified.

When Jonah Townsend, the human Talib had turned about a hundred years earlier, re-enters the picture, Talib and Conley’s newfound happiness is threatened. Conley becomes the tool that Jonah uses to get back at Talib and Talib is forced to make a choice. Fight for his own happiness and risk Conley’s life, or put Conley’s safety first and sacrifice what he’s searched and struggled for over two hundred years!
Posted by Eden Winters at 4:44 AM