Please welcome P.D. Singer to the blog, while she discusses. non-exclusive relationships and what constitutes cheating, and offers a snippet of her new novel, The Rare Event. 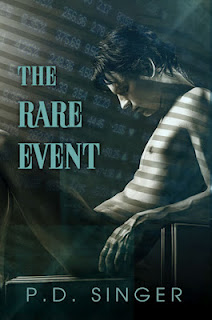 A romance is all about finding the wonderful forever love, so the happy ending is just built in. But what about the getting to the point of even noticing that there’s another man with whom forever is a good idea?

That period before the commitment is known as “dating”, and those of us who have done it know that exclusivity isn’t always part of it. In fact, the “eyes meet, no one else exists” part happens more often in stories than in life. Isn’t the deciding just as important as the final decision? And in the meantime, if the story supports it, why shouldn’t the character still play the field?

A relationship evolves, and one of the stages involves concluding that forever is a good idea. Some people take a hell of a long time to make up their minds. Sometimes the other person can’t wait any longer for a decision.

This isn’t the same as cheating. There have been no promises made, no declarations of where the boundaries are. In fact, if one of the terms of the relationship is that they aren’t exclusive, that they are both free to see other people, then they are just drawing out the dating phase. Sometimes to ridiculous proportions.

We’ve seen real cheating: that looks different. The couple has made promises and put restrictions on what is acceptable and what is not.  Maybe “anything we both do with a third (or fourth) party is okay, because we’re doing it together.”  Or “Bye, honey, have fun at the club, I’m going to watch Netflix tonight.” There are a lot of ways to define the commitment. “No nothing with anyone else ever” is one way, and probably the one we like best, because it’s familiar and the ideal we’ve been taught to strive for. Real gay men don’t always draw the boundaries in the same places that traditional heterosexual couples do, and don’t we read them because they aren’t the same as het couples?

But for cheating to occur, there has to be a violation in the limits that the couple has agreed to. Any definition the reader has is not something that binds them.

And if the two men haven’t moved past the dating stage and feel free to see others? I’m not about to call that cheating: they haven’t decided for themselves what their relationship is going to be. That’s what the romance is for—I’m going to read it and see how two hot men choose.

Jon and Ricky, from The Rare Event, are still working this out. Here’s an excerpt:

***
Almost against his will, Jon’s arms slipped around his wandering lover. “I don’t know that. What I know is that any man around you is either someone you’ve fucked, someone you’re going to fuck, or someone too straight or too contemptible to fuck, though they might do in a pinch.”

“Those aren’t bad categories. Jon, yeah, I like variety. But I keep coming back to you. Out I go, back I come.” Ricky stroked his fingers through Jon’s wet hair. “I always come back to you.”

“What if I did that?” Jon pulled away, but Ricky wasn’t letting go easily. “What if I had sex with someone else now and then?”

“You’d be entitled, I guess.” Ricky looked sideways into Jon’s eyes, confused. “But you haven’t. You wouldn’t.”

“Why? Why wouldn’t I?” Anger gave Jon the strength to jerk back, and knowing the answer made him want to pull more clothing on, to cover himself.

“It’s just… that’s not who you are.” Ricky shook his head minutely.

“Damned right that’s not who I am.” That wasn’t how Jon would have explained it had Ricky asked. “But what I don’t get is why who I am isn’t enough for you.”

He wouldn’t press more; he couldn’t say another thing without demanding something that Ricky couldn’t or wouldn’t give him, and if he stayed another second without demanding it, he’d either punch Ricky or cry. Or both. He shoved out the bedroom door, past Ricky, whose mouth was hanging open, and fled barefoot for the beach.

Ricky came outside about twenty minutes later, carrying a fried egg sandwich wrapped in a napkin. “You’re bonking after your run. Here.” Jon put down the stick he’d been using to randomly draw and dig in the sand and accepted the peace offering. “It’s all worse when you’re hungry.”

Maybe the hollow pangs in his gut weren’t just misery. Jon ripped off a corner of toast, hating that Ricky had a point.

Ricky sat down in the sand, assuming the same cross-legged position Jon had, and picked up the twig. Jon ate silently, feeling his blood sugar coming back up point by point. He licked his fingers, knowing that he’d lost control of his tongue earlier because of how much his exercise had taken out of him; he’d met other men wearing that knowing expression and kept silent. The encounter with the stranger in the beach house wasn’t the first such, and hadn’t Ricky come as close to declaring his affection as he ever had? Jon had given up the jealous scenes after the first he’d pitched, a year ago, when he hadn’t touched Ricky for a week after and had only seen him in the office in passing.

“It is,” Jon finally admitted. “But it’s bad enough the rest of the time.”

“You really hate that we’re not exclusive, don’t you?” It wasn’t really a question. Ricky dug the twig deeply into the sand, finding the damp, dark layer under the surface.

“I try not to push, but yeah. I do.” Jon crumpled the napkin in his hand just for something to destroy. He looked out at the water in the bay, not at Ricky, or he’d need the napkin to wipe his eyes.

“I don’t know that I can ever be, Jon. Home base with you is as close as I’ve ever gotten.” Ricky smoothed the dry sand over, hiding the damp below. “I won’t make you a promise I can’t keep.”

“That’s something.” Jon sniffed in spite of himself. “I don’t want broken promises. Or lies.”

“No, you’ve been more open than I can stand sometimes.” Ricky had never hidden his adventures, but he’d been more sparing with details after that week’s hiatus. Jon didn’t want to know more than “Did you use condoms?” There’d been a six-week gap and some blood tests before they’d been intimate again the one time Ricky had said no.

“Jon, what you want and what I want are… aren’t the same. Would you be happier if… if we didn’t see each other?” Ricky’s voice was low, almost lost in the mumble of the surf.

“Yes.” Ricky jerked around to stare at him. “No.” Jon wrapped his arms around himself, shivering in spite of the warmth of the day, and leaned into Ricky. “I don’t know.”

The hell of it, Jon thought, with his face buried in Ricky’s neck and their arms tight around each other, fallen backward onto the sand, was that he truly didn’t know.

Hedge fund trader Ricky Santeramo has it all: money, looks, and fellow trader Jonathan Hogenboom. The two couldn't be further apart: Jon is from old money, and Ricky clawed his way out of blue-collar New Jersey. Jon hedges his positions; Ricky goes for broke. Jon likes opera and the Yankees, Ricky prefers clubbing. Jon drinks wine with dinner, Ricky throws back a beer. Jon wants monogamy; Ricky likes variety.
Everything’s changing, in the stock market and their relationship. Airlines are bankrupt, the housing market is crumbling, and Jon's old friend Davis comes to town, ready for baseball and forever.

Faced with losing it all, Ricky must make the savviest trades of his life and pray for a rare event. His stocks and Jon's heart are on the line.