My dear friend P.D. Singer is giving away a print copy of her upcoming novel, The Rare Event, at Goodreads.


Because I’m so delighted with The Rare Event being available in so many formats, including “Dead Tree,” I’m offering a signed copy of The Rare Event to one fortunate reader. If you’re a member of Goodreads, (might as well, membership is free and there’s lots to see, do, and yack about, in addition to tracking your reading) click here.

I had the priviledge of beta reading this book, and let me tell you, it's a definite keeper. Although it's 118,000 words, it was a quick read for me because I couldn't put the darn thing down. Look for it March 30 from Dreamspinner Press. Isn't that an amazing cover? 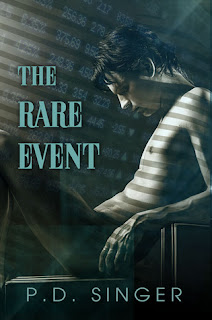 Bankrupt airlines are facing strikes, the housing market is starting to crumble, and Jon can’t wait any longer for Ricky to commit. One last night alone and one last risky trade make Jon say, “Enough.” Then Jon’s old friend Davis comes to New York City, ready for baseball and forever. The whole world is chaos, but there are fortunes to be made—or lost—and hearts to be broken—or won.

Faced with losing it all, Ricky must make the savviest trades of his life and pray for a rare event. His portfolio and Jon's love are on the line.