Night Watch is Now a Free Read at ARe!

Last week my novel The Telling posted all All Romance Ebooks as a free read, and it's joined this week by the short sequel Night Watch, which picks up roughly a year where The Telling left off.

Javier "Jay" Ortiz had always considered the Fourth of July a time for celebrations, fireworks, and cookouts – that is, until he met Michael Ritter, a US Army veteran traumatized by the horrors of war. For Michael, the Roman candles sound like rockets and the pops and blasts of fireworks mimic rifles and grenades. When bitter memories trap him in the hell of his own mind, can his partner's love bring him back?

The cover was designed by my good friend Jared Rackler, of Jared Rackler Designs, and I think it's so perfect for the story. 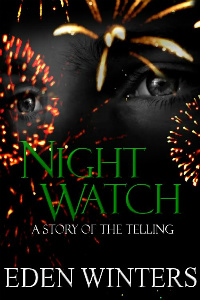