Heading Into the Home Stretch...

I'm putting the finishing touches on A Bear Walks Into a Bar, and have to admit to pre-release jitters. While I've written off-beat shifters before, I've never written anything involving three-somes and more-somes.

Look for a cover reveal on January 4th, and the book will release from Rocky Ridge Books on January 16th.

It takes one strong alpha with a tight grip to keep a mountain full of shifters under control. Sawyer Ballantine’s contending with an uppity wolf leader and a herd of shifter elk bound and determined to take over. He might be the lone bear on the mountain, but he’s not going to allow another four shifters to just move in, especially not when they whiff of power. They’ll either be his in all ways, or they’ll be gone.Dillon, Jerry, Kevin, and Brad have no one but each other since their groups kicked them out. The young bear, wolves, and fox make a merry ménage, pooling their meager skills and serving beer. They’ve stumbled into more than they understand, caught in the dispute between the Urso of Ballantine Mountain and the elk. But winter’s setting in, and they don’t know how to keep Dillon safe for hibernation.And then a bear walks into their bar.

Posted by Eden Winters at 3:41 AM No comments:

I'm thrilled that Manipulation (Diversion 4) and Redemption (Diversion 5) both placed in the 2015 Rainbow Awards for The Dorien Grey Award for Best Gay Mystery / Thriller.

But more than placing, I'm honored to be a part of something that, in so short a time, has done so much good in our genre and in the community. Also, much appreciation to Elisa Rolle for naming awards after some our own who, sadly, are no longer with us.

Participation in the Rainbow Awards raised more than $17,300 dollars for LGBT charities.

Thanks to the judges who gave of their time for this endeavor. So many authors, myself included, have benefited from Elisa Rolle's site, reviews, and efforts to get the word out about the great stories available from both publishers and indie authors.

I'll post no links to Manipulation and Redemption here, as this isn't an ad; this is just my way of saying thanks to all the folks who have made this possible, of showing my admiration for my fellow authors, showing appreciation for readers and reviewers, and remembering dear friends.

Hugs to you all, 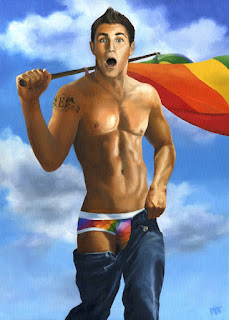 Posted by Eden Winters at 5:23 PM No comments:

What's in a Word: Mirror, Mirror

When you read, do you form a clear image of the characters in your mind? Do those images change the more you read? How, as a reader, do we learn this information, and how should authors impart it?

As an author, I could have a character stand before a mirror and give a complete description of themselves, or another character could say, "He had brown hair, blue eyes, was six foot tall, etc..." Firstly, my editor would send the novel back to me and say, "Work these details in organically." Secondly, that isn't how we, in our daily lives, become familiar with another's appearance, is it? Familiarity with a person's appearance doesn't happen for me that way, so it doesn't for my characters either.

When we meet people, we might make assumptions about height, age, basic body style or notice something like a chipped front tooth. And that information is based heavily on what we need to know. Meeting a new coworker who'll be sharing a huge project with us? We're more likely to pay attention to what they say and how knowledgeable they are than how they look. Meeting a blind date? That might be more about looks for a first impression.

The mail carrier who shows up at your door to deliver a package? Unless there's something striking about them, wouldn't you be too focused on the new iPad or whatever they just handed you to pause and absorb what they look like?

My mail carrier drives a....um.. a car! Yes! That's it! She drives a car. And she has brown hair. Um... she's somewhere between twenty and forty, and reminds me of the woman on the butter commercial...
Oh, and she says, "Here ya go!"

See what I mean?

When describing a person in a novel it's easy to overdo a peripheral character, thereby misleading the reader into thinking this is a key player because we've given so much detail.

But even when waxing poetic about a love interest's features, we must be careful to be realistic.

We may or may not register that a person we're just meeting is attractive, their hair color, if they have freckles, body type, tattoos, scars, or other things, and certain details could be hidden by clothing and later revealed when the new neighbor takes off the parka when warm weather arrives and dons a tank top to cut grass. And sometimes our first impressions are wrong. Have you ever been talking to someone you know fairly well and realize they're taller or shorter than you'd originally assumed?

Hmmm... what color are my mail carrier's eyes? For that matter, I have no idea how tall my neighbor is. I don't know about her eyes either, and her hair color changes.

Have you ever noticed something about a long term acquaintance that surprised you that you'd never noticed before? "What do you mean her eyes are different colors? Wow! I never knew that!"

When Lucky first meets Bo of the Diversion series, he's determined to hate him, so he hones in on characteristics that he sneers at and that don't fit into his own experiences, like the fact that Bo has blond highlights in his brown hair and manicured nails. And because he's Lucky he also notices Bo's bubble butt.

At this point in the story, Lucky doesn't want to know more, and given his inferiority complex about his short stature, he doesn't want to dwell on Bo's being so much taller.

At the gym, in the shower, he notices Bo's runner's-build, something he wouldn't necessarily have been aware of while they were dressed.

As Bo grows on him, Lucky begins to notice other things: "Brown eyes a man could get lost in" and "a smattering of freckles across his nose."

The same holds true for narrator Lucky's description of himself. He mentions that his dirty-blond hair and height mean people don't notice him, and later we find that he doesn't consider himself model material.

Later still we're privy to his workout routine and musculature that helps him, in his mind, protect himself from those who'd prey on him.

Aillil and Malcolm from Duet are similarly antagonistic at first, and like Bo and Lucky, they start out noticing bad things, mingled with firmly denied attraction, and move on until they're very familiar with each other.

Full descriptions of all four men are in the novels, but, as in real life, they're not given all at once.

When I pick up a book to read, I love to discover who the protagonists are, with a fact here and a fact there, as I would in real life.

And when someone shows me a picture of what they think one of my guys looks like, it makes me happy that I've written someone they can relate to and visualize.