The Prodigal, now available at All Romance eBooks

I'm happy to announce that rent boy Mark, from The Angel of 13th Street, finally gets to tell his tale.
This story originally appeared in the Toquere Books anthology Someplace in this World. 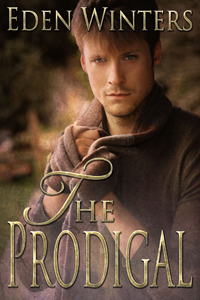 Sauntering to a john’s car is a far cry from hauling hay back on the farm, and none of the married men or rancid losers who hire him come close to the love Mark left behind. His father’s angry words still ring in his ears a year after Dad caught Mark kissing Eric. “Get out of my house and don’t come back!” doesn’t leave a guy a lot of choices.

Mark’s lost all he held dear, but the man known as The Angel believes there’s hope. More than anything, Mark wants to go home—but can a runaway rent boy ever truly go home again?

Mark looked right and left before approaching the waiting vehicle. He really didn’t want another customer, but if one of Willie’s spies saw him walk away from easy cash he’d be in real trouble. Taking a deep breath and slowly exhaling to calm jangling nerves, he approached the lowered passenger side window.

Even in the low light he could see that the man sitting behind the steering wheel was fairly attractive, with light brown hair and a medium build. Mark leaned into the car and smiled as he’d been taught to do, though his heart wasn’t in it. He’d gotten good at lying, even convincing his body language to play along. To customers he must appear willing and able, always. “Looking for me?” he purred, striking a seductive pose.

“Could be,” came the casual reply. “I’m looking for a bit of entertainment. What will it cost me?” Despite the fact that the sun had long since set, dark glasses concealed the man’s eyes. Lots of johns wore similar disguises, but Mark really wished he could see those eyes. The guy appearing impaired was a valid reason to walk away. Even Willie didn’t tolerate drug abuse. Rumor had it that someone the pimp once knew had been badly hurt by a meth-addled customer, and the fastest way out of Willie’s employ was to earn a reputation as a user.

“What kind of entertainment?” Mark asked, a wink saying he already had a pretty good idea. This was a dance he knew very well. Maybe I should have studied drama, I’ve certainly become one hell of an actor.

Mark scrutinized the potential customer, alert for signs of danger. The john appeared nervous, worrying his bottom lip with his teeth. That was nothing new, and normal behavior for a man approaching a male whore while wearing a shiny gold band on his ring finger. His next words confirmed Mark’s suspicions. “I don’t have much time. The wife gets off work soon.”

Those dark lenses dropped, revealing dark brown eyes. Eric’s eyes. Mark swallowed hard and pushed away from the car. No! He couldn’t do it. He couldn’t kneel and suck this man off while looking up into eyes that so cruelly reminded him of all he’d lost. Hoping to scare the john off, he named a price sure to have tires screeching into the night. As soon as the words left his mouth, a metallic snick sounded behind him and the cold kiss of handcuffs clamped around his wrists. The heat of a warm body pressed against his back. Shit, a team.

Those shaded glasses slipped back into place as the “john” recited familiar words, “You have the right to remain silent… ”

Mark closed his eyes with a weary sigh, head bumping against the top of the car. Here we go again. Willie was going to kill him.
***
Now available at All Romance eBooks

Coming soon to Amazon
Posted by Eden Winters at 9:25 AM